A greate database with a great background.

Havalite CMS is based on three magnificant softwares which changed the face of the modern internet: Php, Javascript and SqLite. The first two of them are well known as they exist since the beginning of the internet era. The third one SqLIte is not well known as much as Mysql but it aproved it self as a strong challange

SQLite does not need to be “installed” before it is used. There is no “setup” procedure. There is no server process that needs to be started, stopped, or configured. There is no need for an administrator to create a new database instance or assign access permissions to users.

The SQLite file format is cross-platform. A database file written on one machine can be copied to and used on a different machine with a different architecture.

When optimized for size, the whole SQLite library with everything enabled is [footprint | less than 350KiB in size]

Most SQL database engines use static typing. A datatype is associated with each column in a table and only values of that particular datatype are allowed to be stored in that column. SQLite relaxes this restriction by using manifest typing. In manifest typing, the datatype is a property of the value itself, not of the column in which the value is stored. SQLite thus allows the user to store any value of any datatype into any column regardless of the declared type of that column.

SQLite, in contrast, use only the amount of disk space actually needed to store the information in a row.

The source code to SQLite is designed to be readable and accessible to the average programmer.

May you do good and not evil
May you find forgiveness for yourself and forgive others
May you share freely, never taking more than you give.

SQLite Database browser is a light GUI editor for SQLite databases, built on top of Qt. The main goal of the project is to allow non-technical users to create, modify and edit SQLite databases using a set of wizards and a spreadsheet-like interface.

phpLiteAdmin is a web-based SQLite database admin tool written in PHP with support for SQLite2 and SQLite3. Following in the spirit of the flat-file system used by SQLite, phpLiteAdmin consists of a single source file, phpliteadmin.php, that is dropped into a directory on a server and then visited in a browser. There is no installation required. The available operations, feature set, interface, and user experience is comparable to that of phpMyAdmin. 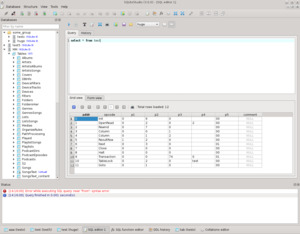 SQLiteStudio is a SQLite database manager with the following features:

See all posts by Teryaki

Havalite, the name is derived from the Database name “SqLite” which i personally admire.
Here I’m Sharing Ideas, Knowledge, Code, Software, Visual Arts and some

Love.
Please, feel comfortable by looking around or if you have a question.

This website uses cookies to improve your experience while you navigate through the website. Out of these cookies, the cookies that are categorized as necessary are stored on your browser as they are essential for the working of basic functionalities of the website. We also use third-party cookies that help us analyze and understand how you use this website. These cookies will be stored in your browser only with your consent. You also have the option to opt-out of these cookies. But opting out of some of these cookies may have an effect on your browsing experience.
Necessary Always Enabled
Necessary cookies are absolutely essential for the website to function properly. This category only includes cookies that ensures basic functionalities and security features of the website. These cookies do not store any personal information.
Non-necessary
Any cookies that may not be particularly necessary for the website to function and is used specifically to collect user personal data via analytics, ads, other embedded contents are termed as non-necessary cookies. It is mandatory to procure user consent prior to running these cookies on your website.
SAVE & ACCEPT